Mincy Lakhmani recalls her experience with Nada Team as volunteer...

“I have been fortunate enough to volunteer at NADA INDIA FOUNDATION  and this experience really stood out as one of the best! The variety of the projects was a real plus point for me as I got to know different issues in area of health among variety of groups. Working out with Mr.Aflilaash at different de-addiction centers and with Mr.DevenderJoti at DRUG USE & HOMELESS:PEER COUNSELLOR facilitating  GROUP,which was wonderful. What I most appreciated was how friendly and open the people were during the sessions. 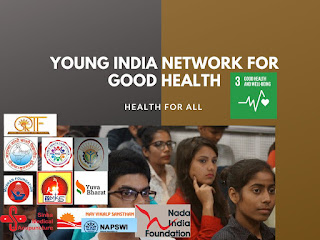 Also,learning research methodology at YOUNG INDIA NETWORK FOR GOOD HEALTH on HEALTH NEEDS was a great experience.Finally, I can say I got the practical exposure of what I’ve learned from textbooks. Preparing questionnaire and taking surveys was challenging yet successful under guidance of Mr.SuneelVatsyayan, a special mention has to go to him ,he was so patient and welcoming. And most importantly, a great mentor!”

Popular posts from this blog

February 26, 2019
OPINION Drug Free India? ....... Prof. T K Thomas 26 Feb, 2019  Two weeks back, this column carried a piece entitled “Hooch Victims: Not Just Numbers!” about death of over 40 people after drinking illicit liquor. A bigger hooch tragedy last week killed over 150 tea garden workers and over 300 hospitalized for critical care in Assam’s Golaghat. A friend asked why such frequent occurrence of hooch tragedies and deaths of poor and marginalized people and why no action is being taken to prevent such tragedies. Familiar with the problem of addiction in the country, he wondered why the government was more concerned about drug addiction and not on alcohol addiction. It took some time to explain to him how the two problems were being handled by two separate ministries of the government of India-Ministry of Social Justice and Empowerment for drugs and the Ministry of Health and Family Welfare for alcohol. Last week on 19th February , the Prime Minister through a video address launched
Post a Comment
Read more